Is vision picking the future? 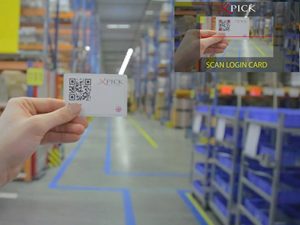 Buzzword or not, this is a technology that is already proving to be very popular amongst the companies that have trialled it. DHL announced last year that after the successful implementation of vision picking in their Amsterdam warehouse in early 2015, they are now looking to roll out the technology worldwide. Samsung has since followed suit with its own vision picking solution at its European parts centre. But what is it? And will vision picking ever see widespread use in the supply chain?

To explain vision picking, you first have to understand the difference between Augmented Reality (AR) and Virtual Reality (VR). VR is complete immersion in a virtual world with no outside stimulus. This is most commonly seeing use in entertainment (films, video games etc). AR is a wearable technology (in this case over the eyes) that alters what users see in the real world. Products like Google Glass and Microsoft’s Hololens are some well-known examples of this.

Vision picking uses Augmented Reality (AR) to improve the picking process in warehouses. In the DHL example above, pickers were given a set of high tech glasses with an inbuilt barcode scanner so they simply had to hold the barcode of an item near the centre of their vision to scan it. The glasses also projected a heads-up display onto the picker’s field of vision as another clever method of streamlining the processes. Users could then just glance up to see real time information like where to place the item once it’s been picked, what needed to be picked next and how much of the job was remaining. Samsung even combined this technology with their smart watches to capture item quantities, further taking advantage of wearable tech.

What are the advantages?

The key advantage of this kind of technology is that it increases picking speed while also decreasing user errors. Because the information needed for picking is displayed in the picker’s field of vision, it is never out of reach. In Samsung’s trial they saw a 12% increase in productivity in their ‘slow moving’ items area and a 20% increase in productivity in their fast moving items area by switching to this system. They also had 10% less errors overall.

What are the disadvantages?

It is rarely mentioned publicly, but it is rumoured that workers don’t like the system. It was well documented that when Google Glass (which works in similar way, albeit for consumers) was released to the public, people complained of headaches after long wearing sessions, and the generally accepted medical advice now is to take breaks regularly and see an optician before use.

In the more critical examinations of the vision picking, workers are said to have suffered from similar health issues, although this is not mentioned in the material of the companies that have implemented it, so it’s not clear where these complaints have come from. The technology is also new, so the long-term health ramifications are not fully understood.

Vision picking isn’t a revolution but an evolution of what is already available. The type of information vision picking displays can already be easily displayed on modern handheld scanners, it is just more convenient to have it displayed in a picker’s field of vision. It also doesn’t yet completely replace the need for a hand-held scanner and the Samsung trial still used one. In this way, arguably, vision picking is an over-engineered solution. Resources may be better spent in finding more software focused solutions of increasing efficiencies and minimizing mistakes, rather than putting the onus back onto the pickers themselves.

Like all emerging technologies, it is worth seeing where vision picking develops. It remains to be seen if vision picking will become common place in the warehouse, but with the market for augmented reality products set to grow to $5.2billion this year, you should expect to hear a lot more about it in the future.